Walkabout exhibit for all

Bread and Puppet Theater, as large as life!

Bread and Puppet Theater is one of the oldest non-profit political theatre companies in the United States. Casteliers is delighted to showcase a selection of puppets, masks, posters, and painted bedsheets from the vast collection that the company has created over the years.

Drawing on hundreds of artefacts from the company’s various productions, this 11th edition of Marionnettes en vitrines! boasts the largest exhibition of Bread and Puppet Theater works ever presented in Canada!

Founded in New York City in 1963 by Peter and Elka Schumann, Bread and Puppet Theater began by creating rod and glove puppet shows for children. Over the years, Peter Schumann, director, baker, dancer, author, musician, choreographer, and puppeteer developed  more complex works in which politics, sculpture, music, dance and text share equal billing. The company has played a major role in the development of puppetry and street art around the world. Their shows often involve volunteers of all ages from the community creating puppets and stories and participating in the performances.

This revolutionary experimental theatre company has long been a voice for social change and against injustice. Their paper mache masks and puppets, whether modest or massive in scale, hold a political punch that inspires radicalism, collective resilience and solidarity.

In 1974, Bread and Puppet moved to a large farm in Glover, Vermont. The 140-year-old barn has been transformed into a museum where the company’s tremendous collection of works is on display.

The company’s name came from an unusual practice: Bread and Puppet offers sourdough bread, which Peter himself bakes for thousands of audience members to remind them that theatre is as indispensable to humans as bread.

During (nearly six) decades of puppetry, thousands of dancing and music-making puppet operators have assisted in the invasion of streets and plazas all over the globe, or they’ve come to Vermont to be part of Our Domestic Resurrection Circus and other summer shows. By the grace of the Whatever Almighty, we have survived and even sometimes thrived, doing hundreds of sculpture happenings and esoteric musicals with activist ingredients, and we hope to continue for a few minutes longer. 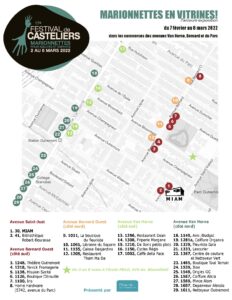 Commissioner: Alexis Smith, with the collaboration of Pavla Mano